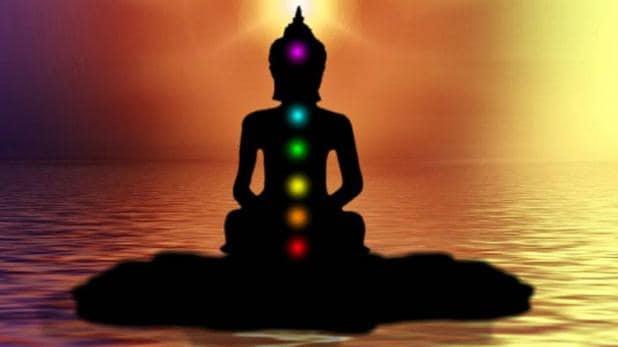 Chakra is a Sanskrit language word which means “Wheel” or “Cycle”. But in Yoga, the joining point of pulses or their unioun point with each other is called Chakra. Although the meeting point of these pulses in human body are mostly triangular, but still they are called chakras. These are the points inside the body from which the body receives energy, mainly there are seven types. These chakras are the centers of energy flow of our body. It is believed that this chakra is sleeping in the idle state, and if a person awakens these chakras then the condition of his life changes. The awakening of these chakras transforms man into his supreme form which is called awakening of the horoscope. With the help of yoga, one can get activate these Chakras.

In other words Chakras are energy centers through which the energy of the space universe flows into the human body.

It is believed that if these Chakras (cycles) are sleeping, then your life is also dull. Therefore it is very important to awaken them to attain salvation with absolute bliss. After waking up, they have a great impact on the mind and soul along with the body.  These chakras control our shape, behavior, thoughts and emotion or sensation. When these chakras bloom and form, our body and mind work in a special balance and then our entire personality blossoms like a lotus.

Total no of Important Chakras in our body: 7

Name of 7 important Chakras in human body are following:

Muladhara in the first cycle. It resides between the anus and the genitals. In human beings, the desire of excessive indulgence and spiritual desire comes from the Muladhar Chakra.

This Chakra is also known as Bhaum Mandal. This base chakra with four petals physically controls fragrance and healing. At the same time, from the spiritual point of view, Muladhar Chakra is associated with religion, artha, kama and moksha.

The Beej mantra of this Chakra is – “Lan”.

It is the 2nd step in Chakras. It is related to religious feelings, so it is also called religious Chakra. It saves us from negative energy. It is located between the navel center at the bottom of the spinal cord in the human body.

The Beej Mantra for this Chakra is “Van”.

Importance of Swadhisthan Chakra: This Chakra increases creativity and positivity in your personality.

This chakra is considered as the centre of energy, so Manipura Chakra is also known as Energy Chakra.

Manipur Chakra is  located at the core of the naval. The person who controls this Chakra is called a “Karam Yogi”.

Importance of Manipura Chakra: With the activeness of this chakra, emotions like attachment, fear, hatred, shame, jealousy, chugli are controlled. This chakra is used for royal qualities and it increases self-power and self-respect. With these qualities one can face every problem of life.

The Beej Mantra for this Chakra is “Ran”.

Anahat Chakra is the fourth main chakra of the human body. It is situated in the center of the chest in the form of a lotus with 12 petals. The Anahata Chakra is also called the Heart Chakra. As soon as this chakra is balanced, you will be more creative.

The Beej Mantra of this Chakra is “Yan”.

Vishuddha chakra is 5th main chakra in human body, It is located behind the throat (Kanth), so its also called Kantha Chakra.

Importance of Awaking Vishuddha Chakra: The person whose Vishuddha Chakkar is balanced, has knowledge of 16 arts. According to Vedas Lord Krishana had successfully awakened this Chakra  and gained control over all 16 arts. This helped him  to control his emotions during different phases in life such as those  Departure from Gokul, Parting with radha etc. Even Lord Rama didn’t posses all these 16 features.

The 16 features of Vishuddha Chakra is:

The Beej Mantra of this chakra is “Han”.

Agya Chakra is also known as Drishti Chakra. It situated at the space above nose, which devides both eye bros which is the dividing line between the soul and the divine. Spiritual awareness, self-contemplation and clear thoughts are attained by this cycle.

When it is awakened, the mind becomes stable and powerful and the seeker has control over the five elements.
Apart from this, the seeker is able to communicate and acquire ideas from this center.
By its awakening, one gets intelligence, memory and strong concentration power. Due to its activation, there is amazing progress in spirituality and there are very good experiences related to spirituality.

This chakra is located just below the peak place in the brain, is a weapon. If this chakra is activated, it means your energy has touched that peak. Shashrara Chakra is also called Kashi of Tantra or Crown Chakra. If a person follows the rule of Yama and awakens this chakra along with the last 6 chakras, then he can achieve the rank of paramahansa. A man who reaches from the base to the Sahastrar Chakra has nothing to do with the world, sanyas and siddhis.

There is no Beej mantra of this chakra. The word Kundalini is derived from the Sanskrit word kundal, which means “curved”. It is believed that Kundalini Shakti sleeps like a snake in the base of every person’s mooladhara chakra, which has to be awakened through hatha yoga practices. The more you succeed in awakening it, the better your overall health will become.