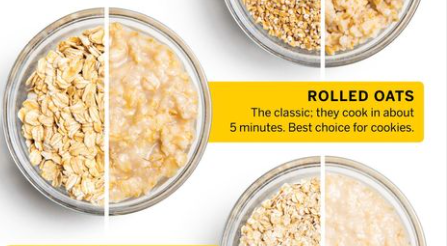 Oatmeal has many health benefits. Anti-cholesterol, depurative, satietogenic. We have lost count of its benefits! How? ‘Or’ What ? Thanks to beta-glucan. This specific fiber contained in oats has the particularity, among other things, of allowing the reabsorption of bile salts in the intestine, thus causing a drop in the production of hepatic cholesterol. Of course, oat flakes are in no way a miraculous remedy that replaces medical monitoring.

Rich in iron , calcium, phosphorus, magnesium , potassium and many other minerals, oats have been used for centuries for their moisturizing, soothing and repairing properties for the skin.

It is no coincidence that the cereal is used in the composition of many beauty products. Thanks to its high vitamin E content, oats have antioxidant powers that act directly on the cells of the epidermis.

Made up largely of so-called “insoluble” fibres, oat flakes have a beneficial effect on intestinal transit . Slowly absorbed by the body, the cereal is known to increase the feeling of satiety in individuals who consume it. This is also what explains why it is recommended for people who follow a slimming diet.

Among the superpowers of beta-glucan, you will also find its ability to reduce insulin secretion. Once again, the fiber with a thousand and one assets displays a new virtue: that of reducing the intestinal absorption of carbohydrates.

Result: blood sugar naturally decreases at the end of the meal, which logically induces a reduction in the body’s insulin needs. In fact, specialists often recommend the cereal to people with type 2 diabetes.

How to consume oat flakes?

Generally eaten for breakfast, oat flakes must be specially prepared to reveal all their aromas. For this, it is advisable to give preference to the purchase of small flakes of oats, which will be more pleasant to eat. Most of the time, these cereals are consumed with milk, and must be heated for a minute or two in a saucepan or directly in the microwave.

The English call it ” porridge “. To enhance your mixture, you can sprinkle it with sugar, honey, oilseeds, dried fruit or fresh fruit. But be aware that oat flakes are not only eaten at daybreak. They can also give relief to your dishes. You can use them to give crunch to your gratins or desserts. You can also incorporate them into your bread dough or your cookie recipe , for example.

What is the difference between oatmeal and oat bran?